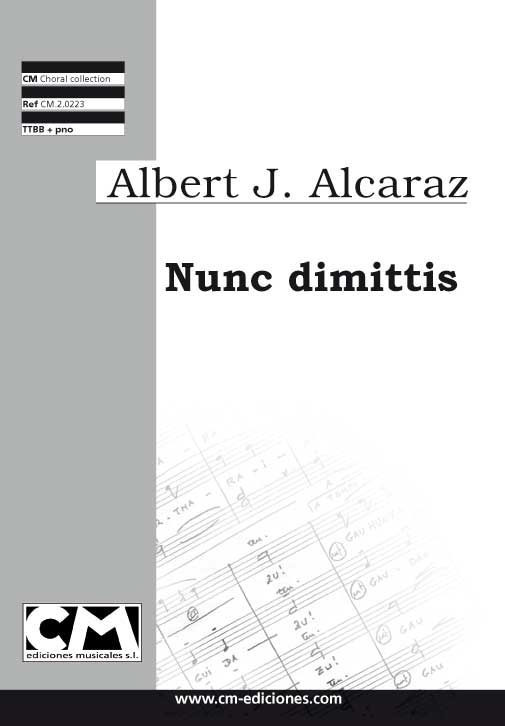 Nunc dimittis in an emotional composition based on a text of the Evangel of Saint Luke (“The Canticle of Simeon”). It is an exciting and lyrical work that details the farewell of a person from this world, with a felling of hope and, at the same time, resignation for the loss.

With slow tempo and solemn climax, it is written for equal voices with occasional divisi an brief solo passages. The piano plays a very important role, in such a way that it transcends its status as a mere accompanist to become a leading part along with the voice.

Other works of Albert J. Alcaraz Pastor
﻿
Ordered by the newest.
Displaying 15 of a total of 15 works
15 of 15
﻿
Forthcoming

This website uses cookies to improve your experience while you navigate through the website. Out of these, the cookies that are categorized as necessary are stored on your browser as they are essential for the working of basic functionalities of the website. We also use third-party cookies that help us analyze and understand how you use this website. These cookies will be stored in your browser only with your consent. You also have the option to opt-out of these cookies. But opting out of some of these cookies may affect your browsing experience.
Necessary Always Enabled
Necessary cookies are absolutely essential for the website to function properly. This category only includes cookies that ensures basic functionalities and security features of the website. These cookies do not store any personal information.
Non-necessary
Any cookies that may not be particularly necessary for the website to function and is used specifically to collect user personal data via analytics, ads, other embedded contents are termed as non-necessary cookies. It is mandatory to procure user consent prior to running these cookies on your website.
SAVE & ACCEPT